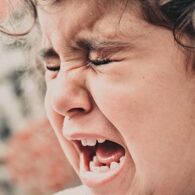 As a child nears three years of age, tantrums lesson because he now has the language to express himself, and he’s busy developing in other areas of his life (such as imagination is blossoming, and more fears are surfacing. Tantrums in older children (starting around 4-years-old) may appear with a surprising twist. A four-year-old is smarter, stronger, louder, and more adept at pushing parents’ buttons. The child now realizes he has his own power in the family, and that can be threatening to some parents. It is important not to squelch an emerging personality by overreacting.

Give a Positive Message

Give your child clear messages of what you expect. Be positive and specific in your instructions: “I expect you to be polite at Grandma’s. We can show her your new books and maybe she’ll read one to you. After lunch, we’ll go home.” This is more meaningful to a child than “I won’t tolerate tantrums, and I expect you to be good.” You can’t reason with a child during a tantrum, but you can before it occurs.

Give your child other outlets for emotional overload other than tantruming: “Use your words instead of your body to get what you want.” Help him use his body positively — lots of opportunities for motor activities and outdoor play. (Get an old mattress or a mini-trampoline to bounce on.) Play lively music to dance to and have jumping contests. Encourage him to draw what he’s feeling on a “tantrum table.” After a tantrum, ask him to “draw angry pictures about what you feel.” You can do this yourself when you’re angry and talk about what you’re doing: “I’m drawing angry lines and angry faces!”

What really helps is for your child to see you manage your temper tantrums. When you’re angry, try lying on your bed, kicking, and hitting the bed. Or, say “We’re going on an angry walk. Get in the stroller.” If you are beginning to realize this is a problem area for you, now that you have little eyes and ears soaking up your every move, you will want to get help on managing your anger. Having children forces adults to take stock of their own emotional maturity. We’ve all been there to one degree or another, so don’t be embarrassed to admit, even to yourself, that there are changes you would like to see take place in you, so you can be a calmer parent.

Don’t let your child use a tantrum as a means to an end. If he knows that as soon as he gets within grabbing distance of the candy at the check-out counter in the supermarket all he has to do is pitch a fit and you’ll give in to quiet him down, then he’s already conditioned to begin his act as soon as you approach the counter.

Next time explain before you enter that high-risk area: “We are not buying any candy, so it won’t do you any good to fuss. You can help mommy put the groceries on the counter. Remember, we’re buying frozen yogurt to have at home.” A friend tells us she handles private and public out-of-control tantrums differently. In private, she becomes so bored by the tantrum that it soon stops. In public, she says sternly to the child, “You may not embarrass me,” — and the child believes her.

One day I was with our then five-year-old, Lauren, at the supermarket check-out counter. (I reason that if the store is silly enough to risk putting candy in front of children, the management deserves the behavior they have caused.) Lauren threw a tantrum in protest. I kept saying “no” to the candy request. Finally, she got the message that “no” means “no”, finally! The clerk later whispered to me “I wish more parents would say “no” to their children.”

Whether or not you ignore a tantrum should depend on what you think the cause is. If you judge that the child is pitching a fit to gain your attention, ignore it. By you not reinforcing tantrums, your child will get the message that this behavior is not acceptable: “It gets me nowhere, I might as well be a nice person” (Then be sure to reinforce the nice person.) If you’re going to ignore the tantrum and walk away, leave your child with the message that you are available: “Eric, you must really be angry. When you calm down, I will try to help.” Then you walk away, though not far, and allow the child to regain his composure. Shouting “shut up” and storming off closes the door to communication and escalates a tantrum.

Instead of walking away from the tantrum, you could try the homebase approach. Stay nearby the scene and keep busy: read a book. Don’t get drawn into the tantrum or start arguing. If the tantruming upsets your harmony or the child wants to get physical, you need to walk away. A phrase we use is: “That’s disturbing my peace.” Remember, a tantrum will go on as long as it can hold an audience. Big audience reactions will be rewarded with an encore. Sometimes, announcing “I’ll be here when you’re ready to calm down and talk” is enough to motivate the child into changing characters.

When a two-year-old goes out of control, you can usually physically take charge. This is not so with the four-year-old or older. He is now big enough to hurt you. You may feel like locking him in his room, but a safer option would be for you to lock yourself in your room until he is able to calm down. If you feel angry enough to hit your child immediately separate yourself from your child.

Some mothers have put a child in a room and have found that the child destroys property. If he destroys toys, remember they are his toys, and you will not replace them. If he destroys parts of the room (breaks a window, dents walls, and so on), he will be shocked at his own angry power the first time it happens. It will most likely not be repeated because it is so scary. The older child can be required to work off what it costs you for repairs. If this destructive behavior does happen again, you will need professional help to sort it all out. There is just too much anger there. Sudden onset of tantrums in older children is a clue to put on your detective hat. There is likely to be a problem going on in your child that needs solving.

One mother we talked with, who is also a psychologist, acknowledged her large part in escalating tantrums. She would keep talking and engaging the child in battle. What she learned was she should have stopped talking and just done something to bring the tantrum to a close.

For resources on discipline, read The Discipline Book: How to Have a Better-Behaved Child From Birth to Age Ten