By understanding why children lie at times, it is easier to understand what to do. Getting behind the deceitful words (or actions) and into the child’s mind will help you practice preventive discipline. Here are ways for teaching honesty to kids.

Connected children do not become habitual liars. They trust their caregivers and have such a good self-image they don’t need to lie. Even the most connected child will spin a few outrageous yarns at four, try lying on for size at seven, and try more creative lying out at ten. When you’ve caught your child lying once, and you’ve corrected her, don’t automatically assume she’s “lying again” if a similar situation arises. Give her the benefit of checking out the facts or she’ll be hurt that you don’t trust her. 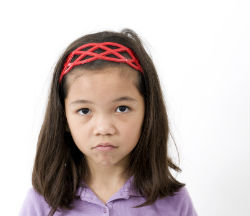 One of the best ways for teaching honesty to kids is to create a truthful home. Just as you sense when your child is lying, children will often read their parents’ untruths. If your child sees your life littered with little white lies, he learns that this is an acceptable way to avoid consequences. You may be surprised to learn the lessons in lying your child witnesses in your daily living. Consider how often you distort the truth: “Tell them I’m not here” is the way you get rid of a phone pest. You rationalize that this isn’t really a lie, or perhaps it is only a “white lie,” which, as opposed to a black lie, is really all right because it gets you out of an embarrassing situation. A basic part of teaching honesty to kids is by not asking them to share in your lie by saying you’re not at home. (Instead, he could say, “She can’t come to the phone right now. May I take a message?”) Don’t tell your child something is “gone” when it really isn’t just to make it easier for you to say he can’t have anymore. Sharp little eyes often see all and you haven’t fooled your child at all. You’ve just lied to him, and he’ll know that, since he knows you so well. Just say “no more now” and expect your child to accept that.

Also, don’t become a partner in your child’s lying. If your child didn’t finish her homework because she was too tired or disorganized, don’t let her convince you to write a note to the teacher saying the printer broke on the computer. These practices sanction lying and teach the child how easy it is to avoid the consequences of poor choices.

3. The Truthful Self is OK

Convince your child you like her just the way she is. “I like a truthful C more than an untruthful A,” you teach the youngster who marks up her real grades. The child who knows her acceptance in the family is not conditional upon performance is less motivated to lie.

4. Don’t Label the Child Who Lies

Avoid judgments like “You’re a liar!” or “Why can’t you ever tell the truth?” Children often use parental labels to define themselves. To them a bad label is better than no label at all. At least “the liar” has an identity. A label can become a self-fulfilling prophecy. Teaching honesty to kids works better when you use phrases like, “This isn’t like you; you’re usually honest with me.” Don’t ask, “Are you lying?” but rather, “Is that really the truth?”

If your child tends to lie, confront him squarely with a misdeed rather than giving him the opportunity to lie. If you don’t want to hear lies, don’t ask questions. If he’s standing in front of the broken cookie jar with telltale crumbs on his hands, it’s ridiculous to ask if he did it. Of course he did it. Confront him.

6. Teaching Honesty to Kids by Expecting the Truth

A basic part of teaching honesty to kids is giving them the message, “I expect you to tell the truth.” Children should not feel they have choices in this matter. Children are not intellectually ready to deal with situational ethics, which teaches: “You tell the truth when it’s convenient, but choose to lie when it’s not.” They’ll get enough exposure to this kind of thinking in high school and college. When your child knows what you expect, he’s likely to deliver.

7. When Your Child Lies

Always correct your child for lying. Don’t let him think he’s getting away with it. Confront him and let him know you are disappointed. A child with a conscience will punish himself by feeling remorseful. Any further punishment would depend on each circumstance. Any natural or logical consequences should be allowed to take place. Occasional lying will happen, but habitual lying needs to receive counseling to uncover the cause.

When teaching honesty to kids, talk about how important “the truth” is every chance you get. Don’t wait until you are in the middle of a situation when what you say may be taken as preaching. Comment on broader topics, such as truth in print and advertisements, how truth keeps life simple (lies to cover lies), and how the truth always comes out in the end. Current events and family happenings can be analyzed from the standpoint of honesty. Talk about how truthful people are respected. Have a look at honesty themes in literature, such as “crying wolf.”

9. Teach a Child When Silence is not Lying

Children are delightfully honest, but sometimes at the wrong moments: “Aunt Nancy, your breath stinks” or “You really are ugly.” Part of teaching honesty to kids is them learning that if the truth hurts someone’s feelings, it is not necessary to say anything. “Sometimes it’s best to keep thoughts to yourself.” While you don’t want to squelch the candor and honesty of children, you do want to teach them to consider others’ feelings. Remember Thumper’s line from Bambi, “If you can’t say anything nice, don’t say anything at all.”

10. Get Behind the Eyes of Your Child

“Maybe you just wanted the toy so much that you imagined that Andrew gave it to you. Shall we call him and check?” This gives your youngster a chance to come clean, or maybe Andrew did give it to him. You need to play detective and help him uncover the truth, for you and for him. Young children can talk themselves into believing a pretend story if it satisfies their desires. Once a child reaches the age of seven he is better able to understand the difference between pretending and telling pretend stories that are intended to deceive.

Sometimes you know that your child has lied to you, and you want to turn a negative experience into a moral lesson. Try offering amnesty. When our son Bob was fifteen he asked to go to a rock concert, which he rationalized would be okay because it was held at our church. We said no, and told him we felt that this particular group modeled values foreign to our family. Conveniently, there was also a team curfew Bob was under because of a football game the next day. Reluctantly he agreed. I had heard about the group, but I wanted firsthand observation so I could be sure of my judgment, so I went to the rock concert. A few weeks later we found out from another source that Bob had attended, too. After getting over our initial shock and anger (this was way out of character for Bob), we called a family meeting and offered “amnesty” to any misbehavior “no matter how awful.” The children were allowed to get any wrongdoing off their chests. Bob confessed. Afterward he shared his relief. (We had worked hard to build consciences that would bother our children when they did wrong — healthy guilt.) We explained we already knew he had gone to the concert, thus teaching Bob it’s unwise to lie. If amnesty hadn’t worked, we would have confronted Bob and there would have been stronger consequences. In this situation, we wanted him to have the benefit of confessing voluntarily so he could experience the reward of deciding to come clean. Bob, now a father himself, fondly recalls this event.

Looking back we realize how our attitude toward something important to Bob actually pushed him to be so uncharacteristically defiant. A highly-principled child from the very beginning, Bob explained he felt we were using the curfew as an excuse to deny his attendance. He was right. We had discussed this ahead of time, before we laid down the rule. We could have asked the coach for an exception or asked Bob to leave early. Bob told us afterward that the whole football team was there, flaunting the curfew. In hindsight, I should have cleared it with the coach and then arranged for us to go together, father and son, to enjoy an outing. Since this whole episode, we’ve watched our teens develop a wholesome discernment in their entertainment choices, and we have broadened our range of tolerance. Martha actually enjoys some of the rock music our children listen to and finds it a window into their world.

If you create an atmosphere in your home and an attitude within your child that honesty is the best policy, and the child’s truthful self is really the nicest person to be around, you are well on your way to building trust and avoiding dishonesty.