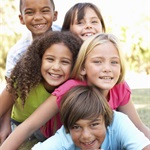 Why worry about kids’ cholesterol?

Consider These Facts About Your Kids’ Cholesterol:

• The importance of controlling your kids’ cholesterol is supported by evidence from the Korean War era; when autopsies of soldiers in their late teens and early twenties revealed build-up of cholesterol-related plaque and narrowing of the arteries, even though on the surface these were healthy men.

• If there is a family history of hypercholesterolemia (a metabolic quirk causing very high cholesterol and fatty deposits in the skin), children should have their cholesterol checked and monitored beginning at 2 years old and rechecked annually.

• Children whose parents or grandparents (under 55 years old) have a history of coronary artery or cerebrovascular disease should have their cholesterol checked before entering school and every few years thereafter.

• Children with parents whose cholesterol level are 240 milligrams or more should be tested anytime after 2 years old and tested again five years later. For school-age children, an acceptable blood cholesterol level would be below 170 milligrams. In a child with a serum cholesterol above this level or with a positive family history for any of the above risk factors, a complete blood lipoprotein panel (i.e., HDL, LDL, total cholesterol, and triglycerides) should be done on blood samples drawn in the morning after a 12-hour fast. To avoid the discomfort of fasting, do a routine nonfasting blood-cholesterol-level test first. If the result is borderline or high, get the complete profile, which needs to be done after fasting. The AAP does not believe that routine cholesterol tests are necessary for every child. Every child over 2 years old should be on a low-cholesterol diet anyway, and foods high in cholesterol (for example, a Big Mac contains 103 milligrams, a Whopper contains 90 milligrams, and a Double Whopper with cheese contains 195 milligrams) should be discouraged for many nutritional reasons. The foods that children should eat more of (fruits, vegetables, grains, lowfat dairy, and fish) tend to be already low in cholesterol.Though it’s not healthy to have a cholesterol phobia, the earlier you help your children learn to be cholesterol conscious, the better for their hearts. Eating habits developed in childhood are likely to carry over into adulthood. Children who grow up on a high-fat, high cholesterol diet are likely to continue this fat preference, whereas children who grow up with a healthy diet are more likely to choose healthy foods as adults.

When fast-food establishments boast that their french fries are “cooked in cholesterol-free, 100-percent vegetable oil,” they are often referring to hydrogenated vegetable oil. This stuff stands up better to both life on a shelf and the heat of the fryer, but the effect on your blood cholesterol levels is similar to that of lard.

Should children have routine cholesterol testing?

Currently, the Committee on Nutrition of the American Academy of Pediatrics recommends: No infants, regardless of family history, should be put on a low-cholesterol diet under 1 year old. (We believe under 2 years old would be wiser.)

Read more about Dr. Sears’ tips to control your cholesterol