Should you drink caffeine while pregnant? 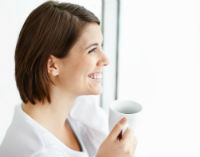 The concerns about drinking caffeine while pregnant stem from research that showed the offspring of pregnant animals given caffeine had a higher incidence of malformations. This statistical finding has yet to be proven in humans, but to be on the safe side, the U.S. Food and Drug Administration (FDA), advises pregnant women to eliminate or limit the consumption of products containing caffeine, including coffee, colas, tea, cocoa, chocolate, and some over-the- counter remedies.

More recent research suggests that caffeine use during pregnancy may cause more problems than originally suggested by the early animal studies. Caffeine has now been implicated in miscarriages and low birth weight.

The harmful effects of drinking caffeine while pregnant revealed in these studies were the result of high doses of caffeine (the equivalent of 6 to 10 cups of coffee a day), and these studies are not considered definitive by any means.

At this writing, there is no hard evidence that drinking a couple of cups of coffee a day while pregnant is harmful to the developing baby, but drinking caffeine while pregnant does stimulate an increased heart rate and metabolic rate in babies, just as it does in adults.

Furthermore, caffeine may remain in the baby’s bloodstream longer and at higher levels, because baby’s immature liver cannot get rid of the caffeine as quickly as can mother’s.

If your body is used to a daily caffeine lift, here are some ways to wean yourself (and baby) off this chemical jolt onto a more natural pick-me-up.

A tea bag steeped one minute releases half the caffeine as one steeped for five minutes. In general, the longer coffee and tea are brewed and the darker the chocolate, the greater the caffeine content.

Try herbal teas that are caffeine-free.

Read the labels of any over-the-counter medicines you take.

Read soda-can labels, or inquire about the caffeine content of a soft drink before you decide to consume it.

If the warmth of the beverage is what satisfies you, try hot water (you can add lemon), warm milk, hot apple cider, or herb tea.

If you are finding you can’t begin your day without the morning-caffeine jolt you had been used to, cut down gradually. Brew your coffee using half decaffeinated and half regular coffee, and gradually decrease the proportion of caffeine coffee. (Even a small amount of caffeine will relieve the headache that sometimes accompanies caffeine withdrawal.)