7 Ways to Heartburn Relief During Pregnancy

Shortly after eating, and sometimes even between meals, many pregnant women belch and burp frequently and experience a burning, irritating sensation just below their breastbone. Pregnancy hormones are to blame as they cause an overall slowdown of the intestines, relax the stomach muscles, and delay the time it takes for food and gastric acids to be passed from the stomach.

Thus, food and acids sit in your stomach longer than they used to. Pregnancy hormones also relax the protective muscles located at the entrance to the stomach which normally act as a protective band, preventing foods and acids from traveling back into the lower end of the esophagus when the stomach contracts.

The medical name for this condition is gastroesophageal reflux (GER). (So what you have is really “esophagus burn,” not “heartburn.”) GER also produces the vague, uncomfortable sensation of “indigestion.”

Later on, as your uterus grows and begins pressing upward, pressure on your intestines and stomach, may make “heartburn” even more aggravating. Try these 7 tips for heartburn relief during pregnancy: 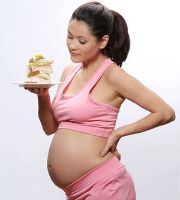 2. Use Gravity to Help Keep the Food Down

Avoid lying flat immediately after eating. It is better to sit up for at least a half-hour.

3. Get on Your Hands and Knees

Many women surprisingly claim heartburn relief during pregnancy when assuming the hands and knees position, which takes advantage of gravity to pull the uterus away from the stomach and allows the stomach contents to move more easily into the intestines rather than refluxing up into the esophagus.

4. Know What Aggravates Your Stomach

Keep a list of which foods aggravate your heartburn and avoid them (i.e., spicy or greasy foods).

Milk, cream, or low-fat ice cream taken right before a meal may coat your stomach and relieve some of the acid burn.

If you take these just before meals they may help. Avoid drinking large amounts of liquid with meals. Use only commercial antacids made with calcium.