Your Chances of Having a Miscarriage

It’s normal to fear the loss of a treasured person, especially when that little person is the baby growing inside you. You may find yourself checking for bleeding or spotting every time you go to the bathroom. Worrying about the chances of having a miscarriage is a normal reaction, especially for mothers who have previous miscarriages.

Don’t worry that every spot of blood or abdominal cramp signals miscarriage. Many women with healthy pregnancies show light bleeding (called implantation bleeding) early in pregnancy as baby is implanting into the blood-vessel-rich lining of the uterus.

What is a Miscarriage? 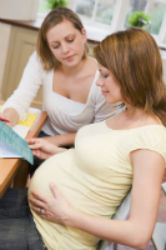 Why do Miscarriages Occur?

At least half of all early miscarriages are due to chromosomal abnormalities in the fetus so severe that growth cannot continue. Other, less common causes that increase the chances of having a miscarriage early on include infections, endocrine deficiencies (especially of progesterone), rare immune system abnormalities (mother makes antibodies against the placental tissue), and exposure to environmental toxins (such as teratogens), drugs or cigarette smoke.

Late miscarriages are more likely to be due to structural abnormalities of the uterus (for example, a uterus divided by a wall of tissue) rather than genetic abnormalities in the baby. Fortunately, the chances of having a miscarriage due to these abnormalities are very low. They affect less than one percent of women. Other causes of late miscarriages are abnormal attachment of placenta, uterine fibroids (benign tumors), an incompetent cervix, infections or endocrine disturbances.

For around a third of all miscarriages, the cause is unknown. The chances of having a miscarriage are not increased by sexual intercourse, safe exercises, heavy lifting, hanging pictures, doing your usual amount of work and play, a minor fall or accident, or stress or emotional upsets.

When are Miscarriages Most Likely to Occur?

Most miscarriages occur before the eighth week of pregnancy. As your pregnancy progresses, the chances of having a miscarriage decreases.

How Common are Miscarriages?

Most pregnancies begin with a healthy fetus, growing in a normal uterus, and result in a healthy baby. Studies have shown that around 10 percent of confirmed pregnancies end in miscarriage. Very early in pregnancy, however, miscarriage may be confused with an unusually heavy, late menstrual period. So the general chances for having a miscarriage is thought to be around 20 percent.

Can I Reduce the Chances of Having a Miscarriage?

In most cases there is nothing you can do to prevent miscarriage, as most are caused by factors out of your control. There are, however, a few things you can do for your baby to reduce the chances of having a miscarriage or any other complications: give baby a healthy womb environment, refraining especially from smoking and harmful drugs, not drinking excessive alcohol and avoiding exposure to environmental toxins.

What if I’ve had Miscarriages?

If you have had several miscarriages, your doctor will probably want to do special tests to see if a cause can be found. In many cases, he or she can help you achieve a pregnancy that goes to term. Structural abnormalities can be corrected by surgery. Hormone deficiency can often be compensated for by injections. Medical science has solutions for many of the common – and not so common – causes of repeated miscarriage.

It may be either bright red or dark brown, depending on how recently the miscarriage began. As many as 20 percent of women with healthy pregnancies may have one or two episodes of spotting or light vaginal bleeding early in pregnancy, so a bloody discharge from the vagina does not necessarily mean a miscarriage has or will occur. Bleeding that is as heavy as a menstrual period or that continues for several days is more likely to be associated with a miscarriage.

These will feel similar to menstrual pains, and/or a low backache

Call your doctor if you suspect a miscarriage. If you suspect you’re having a miscarriage, call your healthcare provider immediately, especially if you are passing clots or grayish-pink tissue. If your bleeding is heavy and persistent, or your pelvic pains intensify, go to your nearest emergency room. (Try to collect some of the tissue in a jar. It can be examined to confirm the presence of fetal tissue and, if desired, to determine whether or not the genetic make-up of the tissue is normal.)

If you have miscarried – your practitioner will perform a vaginal examination to determine whether the miscarriage is complete (you have passed all the tissue) or incomplete (some of the fetal tissue still remains in your uterus). Miscarriages that occur prior to eight weeks are usually complete. The later in pregnancy a miscarriage occurs, the more likely it is to be incomplete. If your healthcare provider determines that your miscarriage is incomplete, he or she will probably want you to have a D&C (dilatation and curettage). While you are under general anesthesia, your cervix will be dilated and any retained placental or fetal tissue is removed. During this procedure the doctor may attempt to determine the possible cause of the miscarriage by examining your uterus for any structural abnormalities. He or she may also send a sample of the fetal tissue to a laboratory for genetic analysis. Since there are many other reasons for vaginal bleeding, your doctor may choose to do an ultrasound to confirm the diagnosis of miscarriage before doing a D&C.

If you have not miscarried – your doctor may just send you home. Or he or she may monitor you with ultrasound and blood tests.

One Miscarriage does not Lead to Another