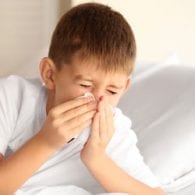 In the lead article in the January issue of Infectious Diseases in Children the authors made these important points about the whooping cough, also referrer to as pertussis:

Infectious disease specialists are concerned about why the number of children with whooping cough (pertussis) has increased in the United States, a country with high rates of vaccination against pertussis.  One of the clues that a child may have the whooping cough and not just a viral or bacterial infection of the lungs is usually with pertussis there is no fever, yet other bacterial and viral infections usually have a fever accompanying the cough.

Parents can also suspect the whooping cough (pertussis) if a child keeps coughing so hard that they need to take a quick heavy breath that sounds like a “whoop” on the next deep breath after the coughing jag.  It’s sort of like a catch-up breath from the breathing they missed during the episode of coughing.

Whooping cough begins with the same signs and symptoms of a common cold: runny nose and a mild cough.  Yet, after two or three weeks when a “cold” should have gone away, with pertussis the cough increases in frequency and severity and can go on for another three or four weeks.  During this time, whooping cough should be suspected and discussed with your doctor.

Besides being sure your child is up-to-date with his whooping cough vaccinations, the authors also stress the importance of seeing your doctor as soon as you suspect whooping cough because treatment with a mild antibiotic may at least prevent pneumonia complications and slow down the spread of the germ within families.