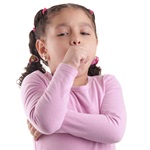 Whooping cough is a highly-contagious bacterial infection caused by a type of bacteria known as Bordetella Pertussis, which infects the respiratory tract.  It is characterized by long periods of extremely violent and uncontrollable coughing spells.  The whooping cough infection spreads as one infected person coughs or sneezes releasing tiny droplets of saliva or music that contain the bacteria into the air.  These tiny droplets can be inhaled by another person and lead to whooping cough.  Outbreaks often occur within families or in school or day care.

A whooping cough infection is serious because it produces a thick, copious mucus that plugs little airways and compromises breathing.  This excess mucus causes the characteristic cough and whoop.  The child coughs to dislodge the mucus plug from his little airways.  Coughing escalates into a 15 to 30-second bout of increasingly forceful coughs, with each cough pushing the mucus higher so it can be coughed out or swallowed.  At the end of the coughing spell, the child is so hungry for air that he quickly takes a catch-up breath, producing a whopping sound.  Then the child rests and seems well for an hour or so.  The mucus re-accumulates and the whooping cycles starts all over again.  These episodes of violent coughs may last for six to twelve weeks.

Other symptoms of a whooping cough infection might include:

Taking a swab inside the nose or in the back of the throat and sending it for culture can confirm a whooping cough infection with Bordetella Pertussis.  It is not uncommon for a test to be negative when in fact a child is infected.  If the doctor strongly suspects a whooping cough infection, he may not test for it.  Other blood tests and/or a chest X-ray may be performed if he believes they are necessary.

What you can do at home

In addition to antibiotics, home treatment is aimed at thinning the mucus so your child can more easily cough it up.