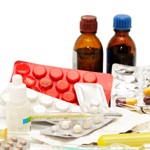 See below for dosage charts.

The Dextromethorphan (DM for short) is a cough suppressant. It acts by blocking the cough reflex center in the brain. It will offer temporary relief (a few hours) to that nagging cough caused by a “tickle” in the throat.

I would use this type of medication for dry coughs especially at night if the cough prevented my child from going to sleep or staying asleep. Suppressing the cough will usually help your child get some much-needed rest for a few hours. Daytime coughs usually don’t bother a child and I only used a cough medication during the day if the cough was interfering with baby’s eating, napping and playing. If your child’s cough sounds very moist like he’s coughing on secretions and there is a lot of mucous in the nose, then I would use a “multi-symptom” combination of decongestant, antihistamine and cough suppressant. In this case it will also be important to follow the natural cold treatments as well.

It is safe to use in children six months (12 months for Delsym) and older for upper respiratory illness (such as colds and sinus infections). If your child has a lower respiratory tract illness (like pneumonia, bronchiolitis or asthma) you should ask your physician before using cold or cough remedies. Side effects of nausea, dizziness, and drowsiness infrequently occur with DM-containing cough syrups.

Delsym is different than other cough suppressants because it is an extended release suspension designed to last for 12 hours.