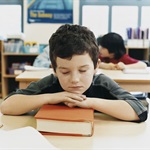 Some foods help the brain work better, some foods drag down brain performance. Be smart and feed your children foods that will make them smart (and also eat these foods yourself, too). Here’s a chart of foods that boost and drain the brain.