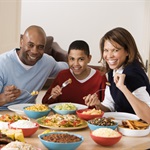 Omega-3’s help practically every part of your body.  Here is just a short overview of the incredible effects of omega-3s.

Effects of Omega-3s on your heart

Omega-3s stabilize the buildup of plaque on the walls of the arteries, preventing hardening of arteries and subsequent rising blood pressure. These flexible fats accomplish this by relaxing blood vessels and speeding blood flow. Consumers of omega-3s tend to have lower resting heart rates and healthier hearts.

By improving the structural components of the cell membrane, omega-3s help the functioning of brain tissue and consequently build better brain cells. They also promote cell growth in the hippocampus and help prevent depression; boost dopamine receptors to combat stress hormones; and feed high-need cells of the retina to improve vision.

Effects of Omega-3 during pregnancy and your child’s infancy

Cytokines are proinflammatory, protective biochemicals that build up during the final trimester of a woman’s pregnancy. While cytokines are good for the immune system, they can produce abnormalities in sleep and energy levels. High levels of omega-3s help women achieve equilibrium and balance cytokine levels during their pregnancy.

Research has shown that there is a positive correlation between breastfeeding and a child’s IQ. Mothers who increase their omega-3 intake have a higher amount of docosahexaenoic acid (DHA) in their breast milk, which builds IQ-boosting DHA in babies’ brain tissue.

Effects of Omega-3s on weight loss and keeping you young

Most people think of oil as unhealthy, but omega-3 oils are among the healthiest foods in the world. Unlike omega-6 oils—the kind found in factory-processed foods, which lead to high blood pressure and high blood sugar—omega-3 oils reduce the complications of obesity and curb the upsurge in inflammation-causing chemicals.

Omega-3s also do an excellent job of combating ailments of aging, including a weak immune system, joint stiffness, and frail bones. This can be partially attributed to their ability to preserve the length of telomeres, which protect the ends of chromosomes and gradually shorten as one ages. Telomeres tend to be longer in seniors who have incorporated omega-3s into their diets, and omega-3s can even increase the percentage of telomere-lengthening enzymes.

For more information about the effects of omega-3s, check out The Omega-3 Effect, by Dr. Bill and Dr. Jim.