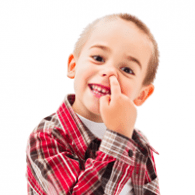 Identifying and Removing Foreign Objects In the Nose

An article reported in the December 2015 issue of The Wall Street Journal called attention to how frequently children stuff harmful objects in the nose.  The usual culprits were cherries, chickpeas, nuts, ladybugs, pebbles and, can you believe it, little flat batteries.  While most of these were harmless and easily removed, the most severe irritations of the nasal passages were associated with flat, round batteries – those used in electronic devices.

The safety lesson for parents:

Toddlers and tiny children love to pick up tiny objects with their thumb and forefinger and put them in their mouth or insert objects in the nose.  So, keep an eye on those tiny objects that are near those tiny little pincer-grasping fingers.

Symptoms of Objects in the Nose

Children often do not complain of an object in their nose, but clues that your child’s nasal discharge may be due to a trapped foreign body are:

While you can carefully try the following home remedies, it’s safer to let the doctor remove the foreign object in the nose. In a cooperative child, sometimes we can get them to press the open nostril shut and sneeze the object clear.  Again, it’s safer to do this in the doctor’s office so that the object doesn’t go from the nose into the airway passages. Your child’s doctor can use a special forceps, suction, or a hook to remove particularly large stuck objects. If you get too aggressive in removing the object, the child can inhale it into her lungs. Even if you decide to have the doctor remove the foreign body, to make it easier, try the following:

If the object in the nose is still lodged far back in the nose and you are unable to remove it with the above measures, take the child to the hospital where a doctor can remove the object with a special instrument. Do not allow your child to lie on his back or fall asleep with a foreign object in his nose since it may be aspirated into the lungs. After the object is removed – either by you or the doctor – be sure to counsel your child not to do this again. Draw a picture of the nose and show your child why nose-picking or putting stuff into the nose can hurt it. Also, it would be wise to continue a “nose hose” and a “steam clean” a couple times a day for several days after the foreign body is removed.