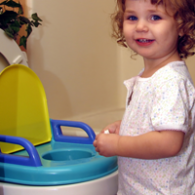 There are toddlers who refuse to announce their productions, hold onto what they have, and resist any attempt to potty train them. If you are frustrated because you are still buying diapers and the potty-chair remains unused, read on for potty training tips.

Later toilet-training, like late walking, may be your child’s normal developmental pattern and one shared by mom or dad when they were in training. The nerves and muscles involved in potty training may not be mature yet. Suspect this cause if your child has been on the late end of normal in other developmental milestones. Most children are well on their way to daytime bowel and bladder training by three years. If by that time you and your child have made no progress, in addition to consulting your baby’s doctor, consider these potty training tips and tools:

Potty training may have begun too early, during a negative stage, or teacher and pupil may be clashing. Ask yourself what could be happening, or not happening, in your baby’s life that makes him reluctant. Consider backing off awhile and taking inventory of the following emotional slumps that may slow training:

This is the most popular potty training tip: make potty training a fun game. Put a sticker chart next to the toilet. Every time he goes potty on his own, he gets a sticker. After several stickers, he gets a social treat. Other potty training tips for positive rewards include small treats to eat, working toward new toys, or putting two coin jars in the bathroom. Every time he goes on his own (even with help and prompting) let him take a coin out of the full jar and put it into his own jar. Sure, he may make frequent trips to the potty to get more coins, but it’s cheaper than diapers.

Potty training tips from our family: It’s okay to fib a bit. Some babies will not be toilet trained until they give up their diapers. One day simply announce, “The store doesn’t have anymore diapers” or “The diapers are all gone.” Let him run around outside (if it’s warm enough) bare-bottomed with only a long shirt on. Or, chance going bare-bottomed in the house. (What you spend on carpet cleaning, you’ll probably save on diapers.) Going bare-bottomed encourages him to take more responsibility for his bodily functions.

The best time for a bowel movement is around twenty minutes after a meal. Let your son sit on the potty after a meal- preferably after breakfast-so he gets into a daily toileting routine.

If your three-year-old is still having “accidents” that you feel are caused by laziness, inattentiveness, or just wanting to be a baby again, let him share the responsibility of cleaning up after himself-not in a punitive way, but in a responsible way. Show him how to wash out his pants and then put them in the hamper to be washed. Expect older children to regress during a negative stage, during a family upset, or shortly after the arrival of a new sibling.

If you feel that he is old enough to take responsibility for his bodily functions, temporarily ignore the pant soiling, giving him the message that if he wants to be uncomfortable walking around in poopy pants, that’s his choice. You want him to get the message that this is his responsibility, not yours. If you feel he’s soiling his pants to get extra attention from you (a bottom clean-up is certainly a lot of hands-on attention), increase the positive attention you give him in ways other than attending to his clean-ups. Give him special jobs to do around the house and special one-on-one outings with one parent. You want to give him the message that positive behavior gets better attention from you than negative behavior.

7. Realize it May Be a Control Issue

This may be your child’s way of maintaining control over one area of his life that you can’t control. If you hold the reins tightly in other areas (choice of clothing, tidiness, choice of pastimes, and so on) don’t be surprised if he becomes a hold-out in this area. It may also be the only way he knows to stay little longer. This may be the time to close the lid on the potty for a few weeks or months, tune into your child, have some fun, and strengthen the bond.

If your child is already emotionally upset and has shaky self-esteem, be careful not to give the message that your child’s value depends upon performance. This number one no-no in parenting is a sure strikeout, whether in toilet-training or in Little League. A caregiver’s role in toilet- training is that of a facilitator. Set the conditions that make it easier for the toddler to go. The rest is up to the child.