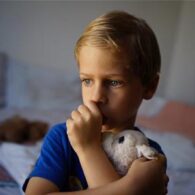 Thumbsucking Statistics and Ways to Help Your Child Stop

In 1977 researchers studied fifty habitual thumbsucking children between ages one and seven. Researchers compared habitual thumbsuckers to children who did not suck their thumb. Studies showed that thumbsuckers tended to be bottle-fed rather than breastfed. The child who was weaned later was less likely to suck his thumb. The thumbsucking children tended to have been fed on a schedule rather than on cue. And 96 percent of the thumbsuckers had been left to fall asleep alone after being fed. But not one of the non-thumbsuckers was left alone to fall asleep. Researchers theorize that during sleep persons return to primitive reflexes, such as sucking and hand-to-mouth actions.

In our pediatric practice, we have noticed that babies who are nursed to sleep and not weaned until they are ready are less likely to become habitual thumbsuckers. Consider breastfeeding as a sort of prevention for habitual thumbsucking.

Like most normal, but bothersome behaviors, if you do nothing but accept and ignore thumbsucking, it will eventually find its way into other occupations. But if the habit persists and is harming the child’s teeth, try these tips: