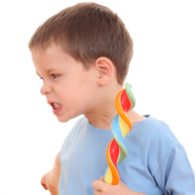 Biting and Hitting are Common and Should be Corrected Early On

Growing teeth and hands often find their way into trouble. Toddlers often bite and hit with little regard for the consequences of their actions. Biting and hitting habits hurt and should be corrected, before serious harm is done to bodies and to relationships.

1. Understand the reason behind biting and hitting

Babies bite and hit. Don’t take it personally. Babies do bite the hands (and the nipples) that feed them. Everything babies do revolves around their hands and mouth. The hands and teeth are their first social tools, and they learn how to use them from the responses they get. As soon as teeth erupt and hands flap, babies experiment and use these instruments on different objects to see how it feels. What could be more familiar and available than parents’ skin? Baby’s job is to use these tools; your job is to teach him how. These early nips and slaps, as awful as they look and feel, are playful communications, not aggressive, disrespectful conduct.

Aggressive biting and hitting is most common between the ages of 18-months and 2½ years when the child doesn’t have the verbal language to communicate his needs. Instead, he communicates through actions. Biting usually stops as the child’s verbal skills grow but hitting doesn’t.

Toddlers bite and hit. What are simply socially- incorrect gestures in infants can if unchecked, become aggressive behaviors in children. That’s why you want to purge these from baby’s repertoire before they become part of the growing child. Children become aggressive in order to release pent-up anger, to control a situation, to show power, or to protect their turf in a toy squabble. Some children even resort to obnoxious behavior in a desperate attempt to break through to distant parents.

Most aggressive toddler behaviors will lessen once the child is old enough to communicate by words instead of actions.


Know what triggers aggressive behaviors. Keep a journal (at least mental notes) identifying the correlation between how a child acts and the circumstances prompting the action. For example: “Kate bit Suzie during playgroup. Suzie had Kate’s favorite ball. It was almost nap time. Lots of kids in a small place. Suzie is very bossy.”


Face-slapping is socially-incorrect gesture babies experiment with. Redirect the slapper into a socially-acceptable alternative: “Give me five.” Likewise, redirect nipping: “No biting, ouchie, hurts Mama! (put on your unhappy face); then redirect the behavior: “Hug mama. That’s nice!” (smile and hug back). Once your child’s face-slapping becomes an expression of frustration (for example, the toddler in your arms becomes angry and hits you because you won’t let her have candy), you’ll have to show her the natural consequence. Firmly but calmly announce “You may not hit” and put her down. She’ll still be angry about the candy, so you can verbalize that for her.

Do not allow your toddler to use you as a punching bag. Give her the message that you will not let her hurt you. If you don’t allow your child to hurt you when he’s very young, he will be less likely to let others hurt him when he’s older. You will be modeling to him how to say “no” to being hit, for example, by holding up a hand to stop the blow but not hit back. If your one-and-a-half-year-old bangs his toy hammer on the heads of other babies in the group, remove all objects that he can hit with. Show and tell him not to hit and give him an alternative gesture: “Be nice, pat baby” as you gently guide his patting hand.

“But the child needs to learn that biting hurts,” you may reason. Yes, but there’s no way your child will decide that she shouldn’t bite if you bite. Try this alternative tooth-for-tooth method: Take your child aside and ask her to let you show her how teeth feel on the skin. Press your child’s forearm against her upper teeth as if she were biting herself, not in an angry revengeful way, but as a parent making a point, “See, biting hurts!” Give this lesson immediately after he bites you or someone else. You want your child to learn to be sensitive to how others feel – an early lesson in empathy.

Katie hits Tommy. Katie’s mother (embarrassed and irritated) quickly goes over and smacks Katie on the arm saying “Mustn’t hit.” Are you as confused as Katie is right now? Have you ever been driven by embarrassment or anger to do something illogical? We all have. So plan in your mind ahead of time what you will do when your child hits someone.

You notice one child hits (pushes or kicks) another to get a toy. Show and tell an alternative way to get the toy. “We don’t hit other people. If you want the toy, wait until your friend is finished with it or ask Mommy and I’ll set the share timer. When I want something from you I don’t hit you, I ask you nicely.” If the hitter doesn’t cooperate, ask the victim to say, “I’m not playing with you anymore until you say you’re sorry and stop hitting.” Two-year-olds may not be able to say all these words, but they’ll understand them; so you say the words for them and follow through with the consequence. Also, impress upon the biter: “How would you feel if Tommy bit you.”

7. Use time-outs to calm the situation

“Biting hurts, and it’s wrong to hurt. You are going to sit by me.” Usually, by two years of age, the child can make the connection between being aggressive and the consequences. Encourage your child to say “I’m sorry.” If he’s not angry anymore, he might want to give a kiss or hug.

A child who lives with aggression becomes aggressive. How do you communicate disappointment, handle conflicts, and get your point across? Aggression is contagious. Toddlers and young children also pick up aggressive behavior from older siblings. If the younger children see the older ones hitting each other, they conclude that’s the way you treat other people. Make this a teachable experience for the older children. Point out their modeling and tell them for their own benefit and the benefit of the little ones to clean up their act.

Grabbing is a common aggressive behavior in toddlers and young preschoolers. (Watch that you don’t unintentionally model this by snatching things from little hands) Calmly explain why he can’t have the item he grabbed and ask him to hand it back to the other child or give it to you. You may have to offer a replacement for what he has to give up. If your child is about to damage something valuable or is likely to hurt himself with an object, use a no-nonsense voice and show by your body language you expect him to give it up immediately.

9. Avoid setups that may result in biting and hitting

Avoid situations that bring out the worst in kids. At a birthday party, a mother set up a scavenger hunt for a bunch of boys — inside her house, of all places. To fuel the frenzy, she offered a prize for the winner. You can imagine what happened. Both the house and the children were a wreck. They hit and shoved each other and trashed the house in pursuit of the hidden treasures. Bruised skin and bruised feelings resulted.


Watch the toddler who habitually bangs toys, bashes dolls, kicks cats, and pounds on walls. While some of this acting out is normal, it can be a red flag for tension and anger. The child is at risk of treating humans this way. Besides delving into the roots of the problem, encourage more gentle play: “Hug the bear,” “Pet the kitty,” “Love the doll.”


Children over three respond well to rewards, such as a no-hitting chart: “Every day you are nice to your friends, put a happy face on the chart. When you have three happy faces we’ll go out to lunch together.”

Some impulsive children hit before they think. For children over three, help them control these impulses by suggesting substitute behaviors that the child clicks into at the first thought of hitting: “As soon as you feel like hitting, grab a pillow and pound on it or go run around the yard.” You can model impulse control for your child. For example, next time you feel like hitting, let your child see you think your way out of it. Grab your hand and talk to it: “Now, hand, you should not hit people.” He’ll pay attention, especially if he’s the one you felt like hitting.

When hitting becomes disrespectful and undermines your authority, it deserves a double-dose of correction from Mom and Dad. Four-year-old Timmy got angry and hit his mother. She immediately sat him down, looked him squarely in the eyes, and impressed on him that under no circumstances was he ever to hit his parents; that behavior was intolerable and would be firmly corrected. She sent him to his room. After this time-out, they talked about his anger. Later that day she shared this incident with her husband who had a talk with Timmy. He reinforced the seriousness of this situation and told Timmy that it would not be tolerated: “I will not allow you to hit the woman I love.” This wise father got some extra mileage out of his discipline by communicating his feelings for his wife.

It’s neither fair nor safe to allow aggressive toddlers to play with potential victims in close quarters without a parent on watch. If your child is aggressive, share your concern with the other parents or teachers in the playgroup, and seek their help in tempering your child’s aggressive behavior. Don’t hesitate to tell them about the problem. You can bet they have also struggled through an aggressive stage with their own children. Your candidness shows your concern for the other children. Otherwise, aggression, especially biting, may destroy friendships. The parents of a biter are embarrassed, while the parents of the bite are angry that their child has been hurt. The biter’s parents get blamed for the child’s misbehavior (“bad parents of a bad kid”), and the adult friendship cools.

Teachers and day-care providers also need to be vigilant in supervising the aggressive child, lest this attitude infect the whole group. In a group setting children learn what is socially acceptable behavior. If they see and feel that aggressive behavior is tolerated — especially if the biter is in the spotlight (“Watch out, he’s a biter”) — they pick up on this label and may try making it part of their repertoire. While the aggressor’s behavior requires immediate attention, be careful not to give the other children the idea that this is the way to get attention. Be sure to find opportunities to praise the other children for their good behavior.

For more information on biting and hitting, read The Discipline Book: How to Have a Better-Behaved Child From Birth to Age Ten, or visit our website