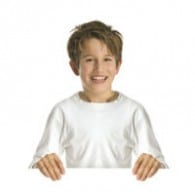 How Will Being Uncircumcised make my Son Feel?

You can’t predict how different your son will feel about being uncircumcised. Boys generally have a wider acceptance of individual differences than adults do. Locker room comparisons are a bit of a myth.

It is difficult to know whether the majority of the boys will be circumcised or intact in the future. The number of circumcisions has steadily declined in recent years as more parents begin to question routine circumcision. Currently, around half of the infant males in the United States are being left intact, up considerably from 23 percent in the early 1980’s.

Since little boys do sometimes compare the styles of their penis, many parents feel it is important to get brothers circumcised so they all look the same. Just as you learn a lot from your first birth and may choose a different style for the next, not every child must be circumcised. If you choose to leave your next child intact, your problem will most likely be explaining to your circumcised child why his foreskin is missing.

Will My Son Ever have a Medical Reason for Circumcision Later?

A medical reason for circumcision to be performed is rare, but occasionally the foreskin does not retract, becomes tight and infected, and obstructs the flow of urine. This unusual condition, called phimosis, requires circumcision. If circumcision for phimosis is necessary later on in childhood or adulthood, however, an anesthesia is given.