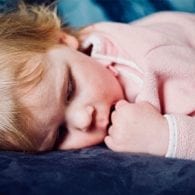 Tips to Soothe Irritated Intestines After the Stomach Bug

Question: My 2-year-old daughter had a stomach bug over the weekend. Monday she was feeling a lot better and yesterday she was back to herself. However, last night she vomited before going to bed. Could this be from overeating on an empty stomach after being sick?

The phrase we use in our family and our medical practice is “low and slow” – meaning “go low” in consuming spicy and greasy foods, and especially foods with artificial colors or artificial sweeteners.  Also, healing intestines are more prone to being sensitive to highly allergenic foods, especially wheat.  You’ve probably heard of “leaky gut” in adults, which simply means the intestinal lining, having been injured, allows larger food molecules to pass through and the immune system fights them as foreign molecules that don’t belong there.  This is why for a week or two after your child has a stomach bug you should feed her only real foods, not packaged, artificial foods.

Next, “go slow” with getting back to her usual volume of meals.  We call this the Rule of Twos:  Eat half as much and chew twice as long.  Grazing rather than gorging is much easier on healing intestines. You may find your child likes smoothies even more while her intestines are healing.  Check out recipes on AskDrSears.com