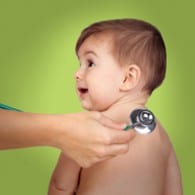 Most people recognize winter as cold and flu season, spring as allergy season, and fall as back-to-school strep throat and cold season. What about summer? Is this the season when illnesses take a vacation too and leave our kids alone for a few months? That would be nice! There are, unfortunately, several very common summertime illnesses passed around in the summertime that flood our pediatric office with sick children and worried parents.

Here is a discussion on the most common summertime illnesses, how to treat them, how to avoid them, when to worry, and when not to worry. They include the summer “flu” (fever with or without a headache and sore throat), diarrhea, viral meningitis, contact rashes (poison ivy), red eyes, swimmer’s ear and sunburn.

Don’t worry! This mysterious fever is probably the summer flu virus. It will run its course in a few days without the need for any antibiotics.

Main symptoms of the summer flu virus include:

When NOT to worry – don’t call the doctor

Worried about strep throat? It is often difficult to tell if you have strep throat (treatable with antibiotics) or have a severe sore throat as part of this virus. Click here to read how to tell the difference.

When to worry – CALL YOUR DOCTOR

If your child is acting lethargic and looks terrible even when the fever is down, you should take your child to the doctor that day. If your child is vomiting (more than just a few times) and/or has severe neck pain (where the back of the neck, not the throat in front, is painful and so stiff your child won’t look down), this could mean he has meningitis. You should see or page your doctor right away. See our longer discussion below on meningitis if your child has the vomiting and neck pain symptoms.

Here are the five main symptoms of meningitis:

Does My Child Have Meningitis?

How to tell if your child may have meningitis.

During the summertime, we see many cases of diarrhea in our office. It can range from mild to severe and can last just a few days up to several weeks. Don’t worry! Diarrhea is usually caused by a virus (not treatable with antibiotics). It almost never warrants a trip to the ER or an urgent page to the doctor. It usually doesn’t even need to be evaluated in your doctor’s office.

See our article on diarrhea for a detailed discussion and to learn about how to treat it, when to worry, and how long you can expect it to last.

Poison ivy is probably the most well-known example of this. It basically refers to any rash that breaks out on your skin from any irritating substance that you come into contact with. This occurs mostly in the summer for two reasons:

There are many different causes of red eyes, but the one we see most during the summer is simple chemical irritation of the whites of the eyes. This usually occurs from pool water, but can also be from lakes or oceans. It is a harmless, usually painless redness. There is no discharge, and usually no stinging or itching.

This can persist for weeks and looks a lot worse than it really is. You can treat it by simply flushing the eyes out with saline eye drops after swimming. It is ok to continue swimming, but doing so may prolong the redness (which, again, is harmless).

If there is any eye discharge, burning, itching, or pain, read more about pink eye or conjunctivitis.

Clues that your child has swimmer’s ear include:

We won’t go into a full discussion here, but just a simple reminder. Use sunscreen regularly, wear hats and sunglasses, and try to avoid playing outside in just a bathing suit between the hours of 10 am to 2 pm (the time when the sun’s rays are the strongest).